Today brought the return of the dreaded hosepipe ban. It’s undoubtedly the one thing which strikes fear into the wet leisure industry, that is until you dispel the rumours. The ban will effect 20million people and can result in a £1,000 for anyone who ignores it. The bad news is the ban has been implemented after one of the first droughts in south England since 1976 and could last until autumn.

The good news is the South West has not been effected. Some water authorities have misunderstood the legislation and told people that hot tubs and spas are included in the ban and can’t be filled or topped up either. That isn’t true. The British Swimming Pool Federation (BSPF) are in discussion with Department for Environment, Food and Rural Affairs (DEFRA), to reassure people that they can refill hot tubs. So, rest assured – the ban does not include hot tubs!

Unfortunately, owners of domestic swimming pools and swim spas are not exempt from the hosepipe ban. They aren’t allowed to refill or top up their pools using a hosepipe. In fact the ban specifically says owners of any type of pool can only use water taken from a tap and transported in a hand held container to maintain it. 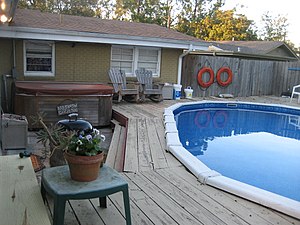 Just because the hosepipe ban does not effect hot tubs, it doesn’t mean we shouldn’t be careful about our water consumption. When it comes to hot tubs, there are other ways to cut down on your water consumption. You could upgrade your hot tub cover, preventing water and chemicals from evaporating and keeping more heat in. For many home owners, holiday letting companies and hotels, hot tubs are an essential part of a relaxing break so it’s important to keep them running. At least now, you can keep your spa running safe in the knowledge that you are on the right side of the law.